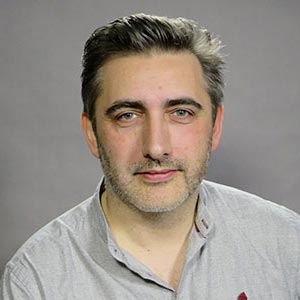 Adrien Delaboudinière first pursued a traditional education in illustration and computer graphics and then in 1998 entered the video games sector, working for Kalisto. He has since worked for several companies before launching Black Sheep Studio with 7 former colleagues. He currently works for Ubisoft as Senior UI artist all the while continuing his activities as a freelancer.

They include working as an art director on Castleween, Wars and Battles, and as a UI artist on Ghost Recon Advanced Warfighter 1 & 2, Raving Rabbids 2, Splinter Cell Double agent, Ghost Recon Wildlands and today on Ghost Recon Breakpoint.

He teaches interface design and art direction to students in Master's Degree of Art Director in Video Game Design.